9 Signs You're A Parent Of Two or More Kids

I envy those mums who neatly navigate their way through parenting; I’m more one of those parents who hurtles through motherhood on a second-hand rocket ship trying not to crash land along the way.
While I’d like to blame it on the fact that I have three young children, I know this isn’t an excuse at all. There are women all over the place with two children or more parenting with plenty of style and finesse. 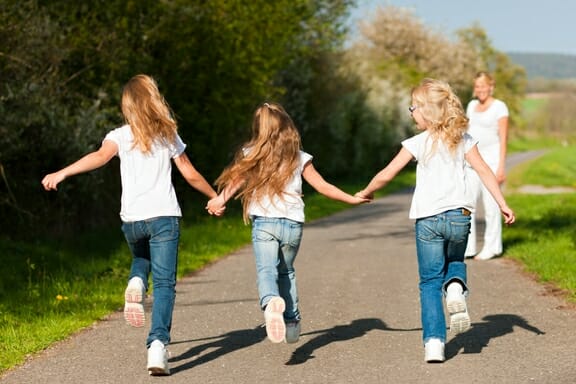 Regardless of whether you’re sail through parenting is smooth or bumpy, there’s a few telltale signs that you’re a parent of two or more children.

1. You’ve learned how to fake it

No, not that sort of faking it, we mean that sometimes you’ll bump into someone that you should know the name of but you don’t so you just smile and chat away profusely, secretly hoping that no one else you know rocks up so you don’t have to introduce this nameless person to them.

With lots of kids it’s easy for you to forget which child hates red apples and which one likes crunchy peanut butter and who will only eat Vegemite sandwiches without butter.

Not only do you often get the names of your own children muddled up, but you often get their friends and school mates names confused also. You probably find yourself describing them in regards to their hair style or remember them as the child who can do back flips on the trampoline or make ‘that funny noise with their tongue’.

4. Half of your life is spent signing forms

From permission slips for camp, excursions and sleepovers, you will know your Medicare number and doctor’s phone number off by heart. You’ll also be super fast at ticking boxes and signing your name.

Just two days after you’ve spent a fortune at the supermarket there will be no food in the house. Your daughter will moan that her brothers ate all the bread while the boys get crabby because dad ate their leftover dinner. As you stop another play fight or scold a child for drinking juice straight from the container, you’ll splutter every name under the sun before you finally land on the right one. This will be a constant source of amusement and annoyance for your kids.

7. Someone gets left behind

Not literally, but it can happen, but you can’t be in three places at once so you usually miss the start of your daughter’s school recital or your son’s semi-final match. With lots of children it is impossible to be everywhere at once and you try to make yourself feel better by telling yourself this will make your kids more resilient!

You let your youngest try things a lot earlier than you did the oldest because you can’t be bothered with the arguing and you figure that the big ones will help them if something goes wrong. Sometimes this ends in tears but often you are amazed at what a little freedom can do.

9. You fail at laundry sorting

With three or more types of white or black school socks it’s inevitable that they will end up in the wrong drawer. You’ll also find that your boys are often exchanging clothes because in your haste to do other things you have got their shirts mixed up. Now who did that particular Star Wars t-shirt belong to?
Bonus sign: You gave up sweating the small stuff years ago because you’ve realised that it doesn’t help and it only creates anxiety for you and your children. This isn’t to say you don’t love it when everything is in its place and the bench is free of clutter, it just means when this doesn’t happen every day you don’t crumble in a heap on the floor.